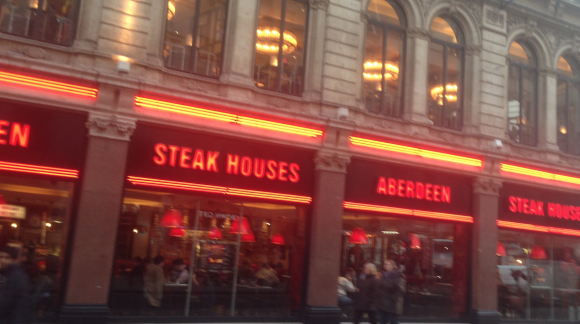 I read recently that you can’t be a true Londoner if you are caught eating at the steakhouse in between Leicester Square and Piccadilly Circus. This struck a chord with me as only a few days earlier I had passed the steakhouse with a friend and expressed my sympathy for the poor tourists eating their £18.50 sirloin within when they could have gone to a plethora of better and cheaper restaurants in a five-minute radius.

My friend had no such sympathy. He argued that anyone with a halfway decent guidebook or access to the Internet could have avoided the restaurant entirely.

I agreed with him at the time, but later realised what a minefield it is to find a good place to eat when you are a hungry tourist. Holiday memories poured back to me. I remembered playing with a plasticky salad at an egg and chip restaurant on a beach in Spain with my mum (we found out later that had we walked 100 metres further down the beach we could have been stuffing our faces with delicious tapas) and eating at a Hard Rock Café in Copenhagen, the supposed gastronomic capital of the world.

In Copenhagen, we were lucky enough that a waitress took pity on my family and wrote down a list of restaurants and attractions to go to. The next evening we were eating in a French Japanese fusion restaurant favoured by young Danish royals. Which might not be to everyone’s taste but at least it was better than overpriced burgers and walls covered in questionable rock memorabilia.

I hope the waiters and waitresses of the steakhouse do the same. If not, I will highlight my rules for how to eat out like a Londoner in London: