Tom Read Wilson is an actor, singer, lyricist and author, and known to millions as the fun and very, cheeky receptionist on E4’s Celebs Go Dating. 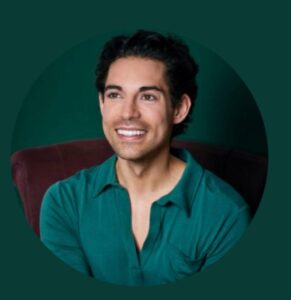 He was first seen on The Voice in 2016, and now regularly appears on Big Brother’s Bit On The Side (BBBOTS) and Roman Kemp’s Capital Radio Breakfast Show, as their dating guru.

Tom’s new quest is to enlighten the public to both the origin and the stories behind every day words. What began as an Instagram mini-series has now led to two book publications: On The Tip of My Tongue for parents and Every Word Tells A Story for kids.

Both are available to pre-order now. How fabulous! 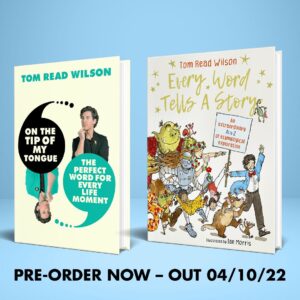 I have two “wordcentric” books coming out contemporaneously on October 4th and they’re available to pre-order now.

The one for grown-ups is called On The Tip of My Tongue and it’s a “how-to” book which, through the prism of language, helps one to fill in the gaps when one might be short of the correct words.

The children’s book –  Every Word Tells A Story – is the study of etymology through poetry. It runs through the alphabet and every letter has a word that’s explored through a poem.

It can be read to be simply entertaining or employed as a rigorous etymological study.The choice is yours!

A publisher got in touch and asked if I had a “wordcentric” book in me, and I said “I don’t know” – after a bit of the ol’ cogitation I suddenly remembered how many times I had unsuccessfully hunted for an etymological book for my two nephews and three godchildren. I’ve conducted several global searches and there doesn’t seem to be one in existence.So, I thought, I’ll write one!

I was inspired by my video series ‘Word of the Day’ on Instagram and by my Dad. He was always brilliant at conveying the stories behind words to us when we were kids and now I feel very satisfied that my new books will fill that gap for grown ups and children today.

Oh, my – without question, it has to be the Theatre.

I have been absolutely starry-eyed and dazzled by the Theatre since I was knee-high to a grasshopper and I am eternally grateful to my Dad for taking me as a child to see The King and I with Elaine Page at The London Paliadium. It was so magical I swooned.

Rodgers and Hammerstein was already coursing through my veins as one of the first roles I ever played was one of the children in South Pacific.

I now try to go at least twice a week, but recently I met a man who goes SIX times a week which puts us all to shame! 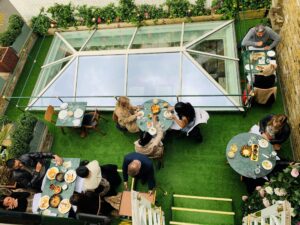 My Dad grew up in Sri Lanka so all my family are wild about Sri Lankan and Indian food, and tucked away in Chelsea there’s a beautiful tiny Indian restaurant called Kutir. It looks like a little Georgian house, so you’d never guess it was a restaurant.

The chef, Rohit Ghai, became the first Indian Chef to be awarded a Michelin star in under a year so as you’d expect, the food is sensational and arrives very prettily decorated. 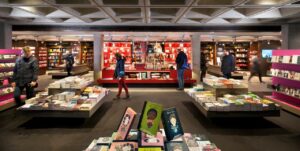 Plays and scripts available at The National Theatre shop

Two shops that one never really thinks of (as they aren’t retail therapy type shops) are the Saatchi Gallery and the National Theatre gift shops.

The Saatchi gift shop is full of treasures and so is the little boutique in the National Theatre. In fact the latter has the most wonderful books that you can’t find anywhere else and it’s a great place to know if you’re meeting someone and you wind up being early (which I frequently do). 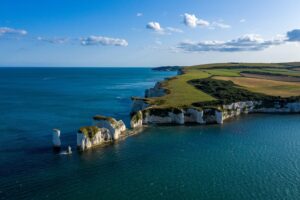 My Dad lives in a very pretty pocket of Dorset called the Isle of Purbeck, where the walks are sublime. It has its own microclimate so it always feels quite clement there.

There’s a wonderful cliff top walk that we do called the Golden Bowl. It’s called that because not only does the grass on it look like a big ice cream scoop, but when it captures the sunlight the whole area turns an amazing golden colour.

With the seaside and glorious fresh air it’s a heavenly spot if you like walking. You’ll capture it particularly well if you time your walk to catch the midday sun.

You should also check out other magical places down in Dorset like Durdle Door and Old Harry Rocks.

What’s your single most vivid memory of London? 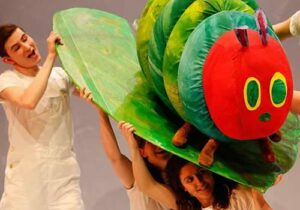 Ahhh that would be the first time I took Artie, my nephew, to the Theatre when he was ten-months-old to see an adaptation of his favourite book The Very Hungry Caterpillar by the late Eric Carle. That was really special.

Artie was a very high-octane baby so I was nervous because I assumed he would never stay still but the moment I carried him in, he looked up at The Gods and said “wow”, which was one of his only few words at the time.

After that, he was absolutely mesmerised and stock still for the whole 45 minutes. Bar sleeping, I’d never know him to be still but he was captivated and has loved the Theatre ever since.

I think London is the best city in the world for Theatre for children. I’ve seen the most sublime performances in terms of the players, the concepts and design… it’s extraordinary and it’s also a wonderful conduit to The Arts as they get older. 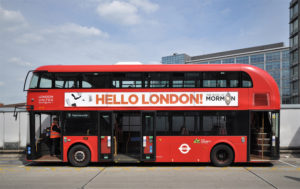 It’s a tie between walking and cycling for me as I do a lot of both. I don’t really get the tube because I like to be above ground and see London. So, I’d sooner spend time at the front of a bus ingesting all of the views and topography of the city than below the streets and subterranean.

Occasionally I get a taxi if I’m feeling flush. 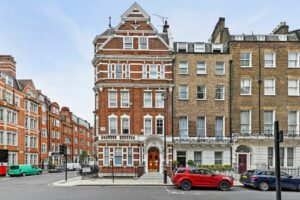 Oh, gosh, I would say….there is ALWAYS an adjacent street!

If you’re getting frustrated and perhaps a little sweary because you can’t walk along a street as fast as you might like, then simply peel off and take the one adjacent. It will invariably run in a parallel line and be empty.

I do it frequently. In fact I don’t think I’ve navigated Oxford Street in years because I always peel off and go along Wimpole Street instead – uninterrupted.