How a penalty led to a pile on

This week someone wrote to KidRated asking that I be sacked….Luckily I’m in charge and that’s not going to happen but how did a penalty lead to a pile on? Here’s how….. 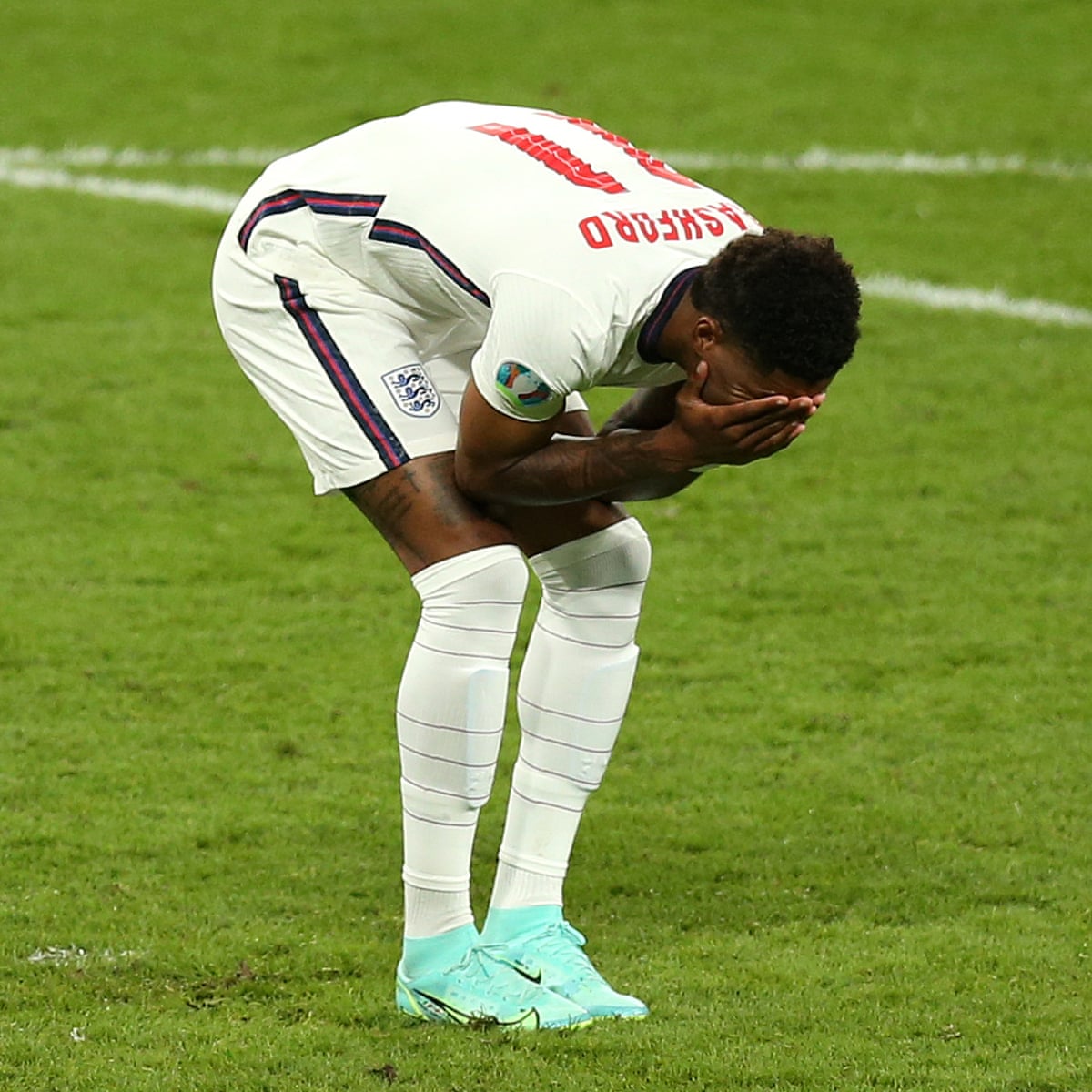 On Sunday night a remarkable team of young Englishmen lost to Italy in the penalty shootout of the postponed 2020 Euros final.

Less than half an hour later when the tearful team was still in the stadium, a strange young man tagged one of those penalty takers and tweeted the following message.

If you’re a parent imagine your kid losing a competition and someone taunting them like that minutes after. Or if that was your sibling, your cousin or just simply your friend. How would you feel towards a creature who could send a message at a time like that? A creature totally lacking in empathy, humanity and decency.

And with all his #BeKind rhetoric and his tales of being bullied at school for his sexuality it seemed as hypocritical as it was spiteful. Gobby people attack each other all the time on social media it comes with the territory, but Rashford isn’t gobby. He isn’t online to provoke and he isn’t online to be divisive – unless you think campaigning for poor kids to eat is controversial – which DG apparently does.

I don’t know Marcus Rashford but his campaigning this year, along with how he and his teammates and manager made us feel during the tournament made me and many others feel paternalistic towards him. My son is a couple of years younger than Rashford and if he achieved a tenth of what Marcus has in his short life I’d be over the moon.

Was it a rubbish penalty – yes? Did it deserve THAT tweet at that time – no?

So I along with many others was shocked by the cruelty and callousness of the Tweet. I support the idea of free speech and deplore hate speech. But this was just hateful speech. It’s one thing to say it in a pub with friends. Another to post it a day later but to actually send it directly to the kid when he was still in the stadium so he would see it when he turned on his phone made me incandescent with rage.

So I replied with:

I had and have no intention of harming him. The chances of us meeting are almost as slim as he is. However, I promised myself that if I was ever in the same TV studio or on a phone-in with him I would confront him about the timing of those words,  make him justify them and then hopefully apologise.

What followed a couple of days later has been as entertaining as it was surprising.

Someone concocted and published a series of messages, in what we now know to be a fake conversation between DG and themselves claiming he had been caught in Year 9 at school, engaged in an act of self-love. DG appeared to bleat in protestation only for the other person to dismiss his angry demands and remind him of his nickname “crafty wan**r.

The messages were fake but for me ignorance was sweet, sweet bliss – I loved them. It looked as though swift justice had been served along with a generous side order of humiliation. It was so timely and perfect I took a screen shot of the posts and tweeted them myself.

The next 48 hours were a blur. My phone pinged every second as the replies, follows and re-tweets came in thick and fast. I couldn’t read them all but they were 95% positive with a strange 5% accusing me of homophobic bullying. That seemed perplexing and I wasn’t sure how that could be. I Unlike DG and Rashford, I hadn’t tagged him and re-reading the screenshots they didn’t contain any slurs – so I just ignored them.

But later that day my friend called me wanting to know why I was in a spat with DG. I wasn’t really I said. I’d been disgusted with his tweet and now I was enjoying his new Twitter nickname which was trending. Not because of my tweet though, I hadn’t written the original tweets I explained – it was someone else who obviously found him equally as odious.

“But haven’t you seen? He’s blaming you?”, they replied. “Read his tweet”:

And there it was. DG was now tagging me and claiming HE was the victim . He cleverly hashtagged his new nickname to keep it trending and then dropped in a bizarre non sequitur about how he was beaten up at school for being gay. The implication being he was attacked for his sexuality back then and now it was happening again.

No mention of what he had done to start all this, his cupability, his meaness of spirit and his thirst for notoriety.

Now I may have said and done some stupid and regretful things on Twitter as I’m sure some people will hunt down or soon reveal, but none have been bigoted. And none have trended because of their spitefulness.

But slowly and surely his supporters picked up on DG’s claims and tried to make the homophobia label stick. A couple of them contacted this website, a couple tweeted at well known followers asking them to disown me. And many simply told me I could never complain about racism EVER again because I was a homophobe. Very few mentioned Rashford. It was clear the majority didn’t know and/or didn’t want to know about that – hardly surprising as in a different life many of them would have been wearing sheets and burning crosses.

However, I needed to get on with work and this was proving a distraction. So, as I had the power to stop it by simply deleting all my tweets, that’s exactly what I did. It had been fun and I’d made my point.

His followers continued to message me for a few hour crowing in victory. None of them could believe I’d deleted the tweets voluntarily. Bizarrely, they thought the threat of legal action by DG in the tweets had scared me into doing it which was very funny because of course that DG was FICTIONAL!

I have to say my online and offline friends were amazing – constantly checking to see if I was ok and sending messages of support. At most I dealt with about 30 loud and persistent ‘trolls’ but at times their noise was deafening.

But what of poor DG. Well, his Rashford tweet is STILL on his Twitter timeline. Plus he went on Talk Radio to be interviewed by Mark Dolan about all the death threats he claims he’s received – simply for “having a different political view”. Now I say interview, I’ve had spa days more taxing then any of the questions Dolan asked him. Seriously, watch it – the clip is labelled about Rashford but his name’s is never mentioned – it’s a piss poor piece of journalism just two friends having a laugh.

A skilled interviewer might have challenged DG and asked “why can’t footballers have political opinions?” They pay taxes and vote. Surely young Black sportsman who represent their country have just as much right to challenge and question government policy as DG. I’ve not accused him of racism but many could successfully argue his tweet was racist as it suggests Rashford is lesser. He should know his place and leave political commentary to white pseudo-intellectuals and rent-a-gobs like DG.

As experiences go I don’t recommend a Twitter spat. They’re exhausting, time-consuming and ultimately unfulfilling. However, I now know for those who make their living from being divisive why they are essential.

DG’s’ currency is outrage – the more ‘outrageous’ he is, the bigger the reaction he causes. This in turn allows him to adopt the persona of anti-woke crusader,  the bullied victim or the outraged electorate and receive about £150 each time every time he’s invited to speak. And a quick scan of his “principles and opinions” over the years show he’ll that politically he’ll adopt whatever position it takes to pay his bills.

In six years he appears to have been a Liberal and a Tory; pro-Europe and rabid leaver. Even his recent posts about the Euros themselves were contradictory – encouraging attacks on the kneeling players; claiming he loved them when they reached the final and then of course slagging off Rashford straight afterwards whilst hailing Saka (who also missed a penalty) as a hero. 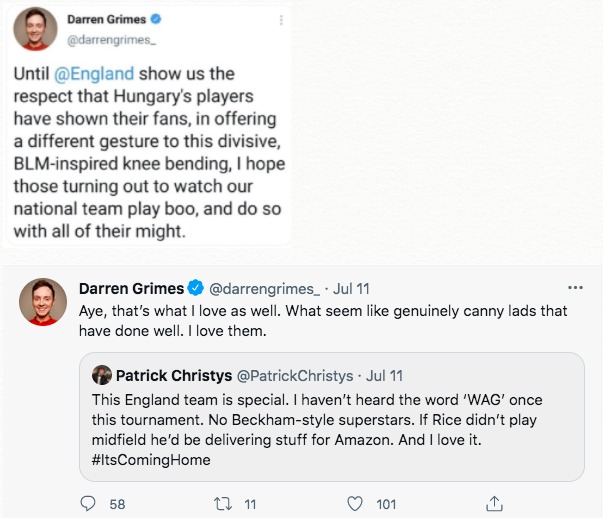 The grift he has chosen (and it is a grift) is hard and many don’t stay the course. To keep it going he will need to be more controversial each time and sooner or later he will trip up and fall just like Hopkins, Lawrence and Hurst. Laurence Fox might beat him to it but it will be close.

On Twitter people say we shouldn’t give him the attention he desperately craves but I think it’s the news outlets that need to reappraise their relationship with him. Is he the sort of political commentator we aspire to now? Is that really the best we can do? What does it say about an organisation that needs to fill airtime with such a poor unprincipled analyst? Does he truly represent them and their standard of debate?

Even ITV realised Piers Morgan had overstepped a moral line that was incompatible with their perceived values and needed to go. But DG’s continued employment shows us just how tired and substandard certain elements of the media are when a lazy producer has him on speed dial if they need some manufactured outrage.

In the meantime, do not lose sight of the original Tweet that started this. A tweet that almost certainly resulted in Rashford directly receiving vile racist abuse. A tweet to a young lad who is everything DG is not – talented, inspirational, kind, selfless, principled, caring, heroic and adored. A tweet the simpering, posturing bully managed to claim victimhood from on a national radio station 48 hours later.

If both young men were cruelly taken from us tomorrow (which I would not wish) which one would be truly missed? Which one leaves a legacy; which one tried to bring people together and which made the world they lived in a better place? Spoiler Alert- It’s not DG.

It’s time we didn’t hear from him again. It’s not that hard – I’ve managed to not say his name throughout  this whole piece. 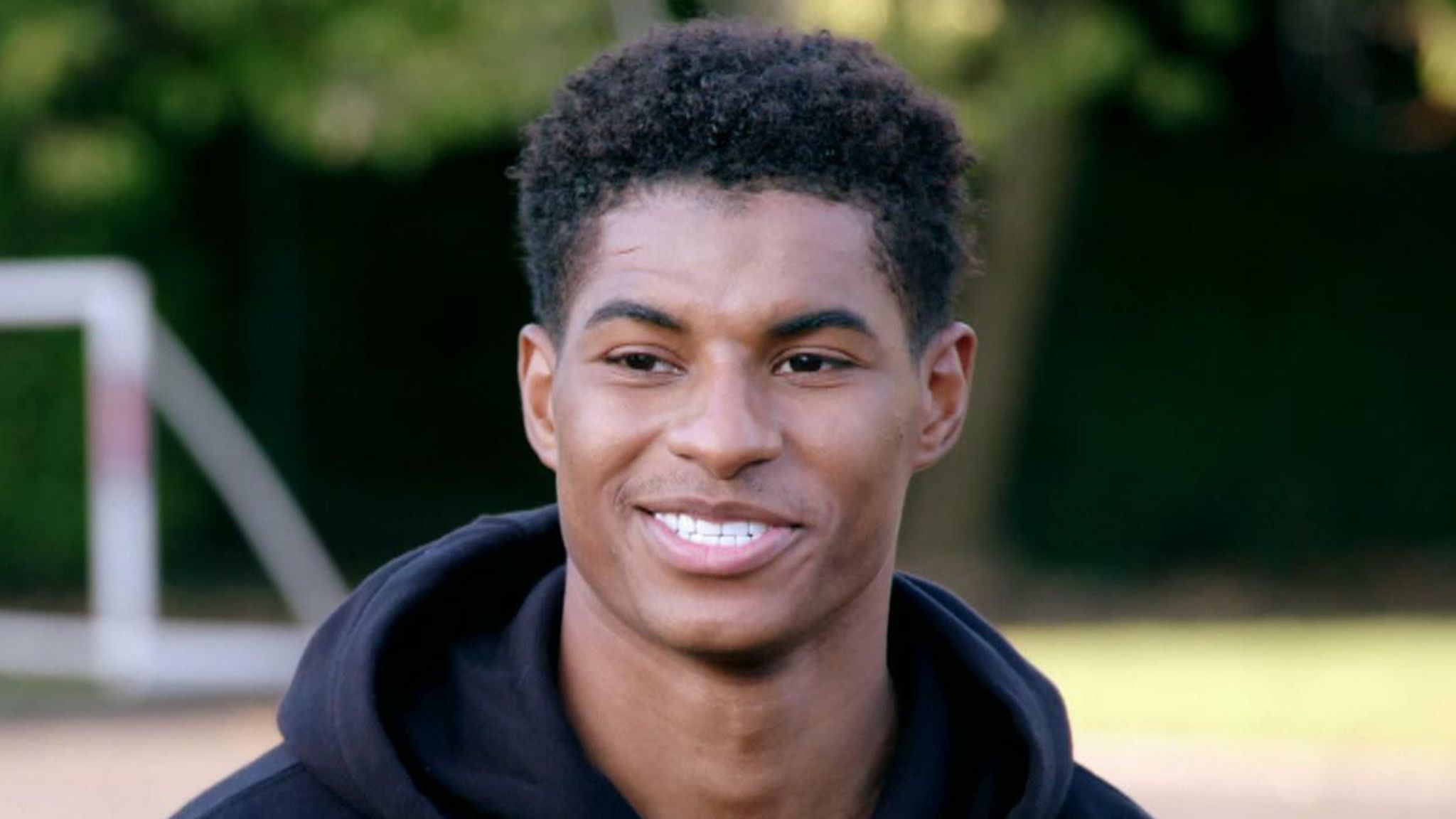