Belinda Williams is an opera singer from London. She is married to a fellow opera singer, and they have created two delightfully mischievous and predictably loud small children. She is very tired.

Where was your favourite place to visit as a kid, and why? 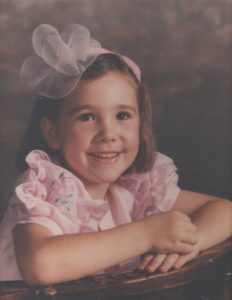 Belinda as a bubba

There was a period in my childhood when we used to take the tube to Harrods and play with the toys in the toy department extraordinarily regularly. I think my mum was having some kind of flirtation with a guy who demonstrated wind-up helicopters (in my memory he was sort of a pirate, so I can see why that would have been attractive). We never bought anything and brought our own sandwiches – thankfully it was in a time before they started charging a quid to have a wee. 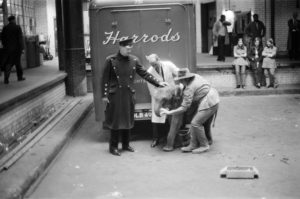 The old Harrods pet store (closed in 2014) which sold exotic animals such as elephants and lions.

In 90s kids’ films, there was always a happy denouement where a puppy or kitten was presented to the child complete with red ribbon round its neck, and I imagine the Harrods pet store was catering for that kind of whim (it quite rightly closed in 2014). The guy who ran it was really nice, and used to put up with me asking lots of questions. One day when we arrived he was closing for a lunch break. He must have seen how disappointed I was, and said that it would really help him out if I could brush the long-haired kittens for him while he had his sandwich. I sat on the floor crosslegged and two tiny blue Persian kittens were plopped on my lap to detangle. That was the best half an hour of my little life.

Where is your favourite place to eat with family? 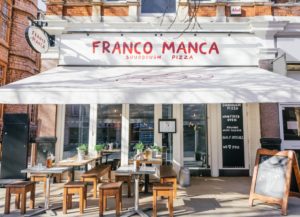 Abject terror. That’s what I feel when I have to eat out with my kids, who only understand to sit down at the table for the duration of the food being in front of them. Like lots of theatre kids who have spent so much time backstage, they’re highly (abnormally) sociable. They’ll go over to sit with other people and tell them their life story, or find an area to do some kind of interpretative dance, or simply stand on a stool and shout BANANASBANANASBANANAS. Terror. 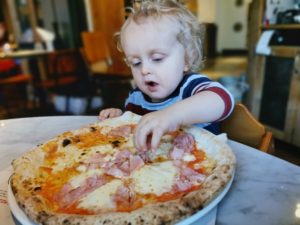 A kid (not Belinda’s) enjoying a pizza capricciosa

The saving grace is often Franco Manca – one of the few chains where I exclaim, “Hooray! Another branch!”. The pizzas arrive moments after ordering, the tumblers of wine for the parents are supremely unknockoverable, and the Italian staff are kind and tolerant with children in that gorgeous way that Italians are. Cheap and portable enough that if the kids have a tantrum it can all be packed to takeaway. Just down the wine before leaving.

What would be your perfect day out with family? 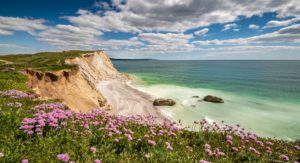 We absolutely adore the Isle of Wight. You take the kids to the beach with lots of provisions and there’s no need to plan anything else. Our favourite beaches are Freshwater Bay, Priory Bay and Compton for fossil hunting. Swimming at high tide, crabbing and rock pools at low tide, picnic lunches and beach barbecues as the sun sets. After a day on the beach, everyone sleeps like a dream.

Ferries from Southampton, Portsmouth and Lymington run from early until late for daytrippers, or there are plenty of brilliant campsites.

Do you have a favourite park?

I’m a Wimbledon girl, and a real hidden gem is Cannizzaro Park. It was previously a private estate and is full of magical little follies. It’s one to get lost in, with or without the kids. It’s always spectacular if you can time your visit with Wimbledon College of Arts, when the park is full of sculptures.

Name THREE places you love going with your kids…

Super little farm for a trip with small kids, plus there’s a great playground just nextdoor, and if it rains (and often also when it doesn’t) we find time to pop into the Tea House Theatre for delightfully doilied tea and cake.

The Polka Theatre (Wimbledon) or The Little Angel Theatre (Islington)

Everything I’ve taken the kids to has been exceptional at these fantastic independent kids’ theatres. Even those children with the shortest attention spans will be spellbound and talk about nothing else for weeks.

There’s an entrance fee, but once inside you can happily spend the day here. It’s especially good if you’re meeting up with people with different aged kids and babies. Great walks and playgrounds, the enormous magical greenhouse, Wolfgang Buttress’s incredible Hive installation, and you’re never more than 5 minutes away from coffee and cake to recharge weary parents. 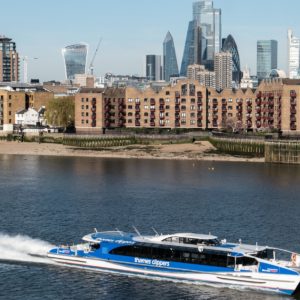 You’ve missed out my two favourites! DLR and Thames Clippers every time. Get the water taxi to Greenwich for the market and visit Cutty Sark and Observatory to enjoy a close up view as you go under Tower Bridge on the way. Then be those parents who elbow everyone out of the way to get to the front of the Docklands Light Railway (like a driverless monorail) so the kids can pretend they’re driving. 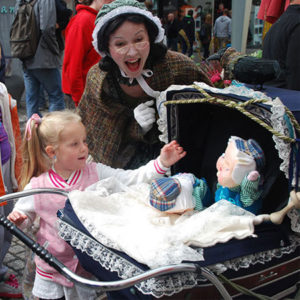 If you’re at the stage with a little one where you could take or leave the buggy, always take it with you. It makes for a useful battering ram at rush hour.